Bosun is a significant piece of our monitoring infrastructure at Stack Overflow. In forums such as Bosun’s Slack Chat Room, we are frequently asked to describe how Bosun is set up in our environment.. This is a detailed post about our architecture surrounding Bosun. This is not the only way to set things up and may not always be the best way either – but this is our current setup.

There are a lot of components we use with Bosun, but they all serve their purposes in our monitoring infrastructure. The following table outlines them.

Metrics are collected many ways:

No matter how data is collected, it is not send it directly to Bosun. They send to tsdbrelays which have two purposes:

They actually do not send directly to tsdbrelay. We front-end tsdbrelay through a load balancer (HAProxy) so that we can scale horizontally.

We also front-end the Bosun service itself for the same reason. One Bosun server is in read-only mode, and flipping between the two requires us to sync the state and take the other bosun out of read only mode. OpenTSDB performance is improved if all write requests go to the same node and our HAProxy setup allows us to funnel all write requests to a single node when all nodes are up.

Many different systems query the time series database. We call this the “query flow”:

Our OpenTSDB and HBase Setup

In our secondary datacenter (named “CO”) we have a three node cluster that is a mirror setup of the NY-TSDB cluster. The HBase clusters don’t replicate across datacenters, rather tsdbrelay relays the datapoints to each independent data store.

We use Cloudera Manager to manage our OpenTSDB clusters. We have found that HBase can be stable, but it is difficult for a shop that doesn’t happen to use it anywhere else.

HBase was very unstable when we first started using it in 2015. The main thing that improved our stability was to switch to OpenTSDB’s “appends model” instead of the “hourly compactions model”. (Note: These are unrelated to HBase compactions).

OpenTSDB stores time series as metric+tags in hourly rows. By storing them as per-hour, OpenTSDB only needs to store the delta (the offset from the base hour) for each datapoint. This is more space-efficient.

In the appends model, storing new datapoints only requires appending to the row. However this requires HBase to read the existing data block, then write it out again with the new datapoint appended. This generates a lot of network traffic.

In the compaction model, it writes the data in a less efficient form but one that requires less network bandwidth. Once each hour it then rewrites the data in the more compact, delta, format. As a result the network activity is reduced to an hourly burst instead of constant reading and rewriting.

In this graph you can see the Append Model’s network traffic load versus Hourly Compaction’s greatly reduced network load. 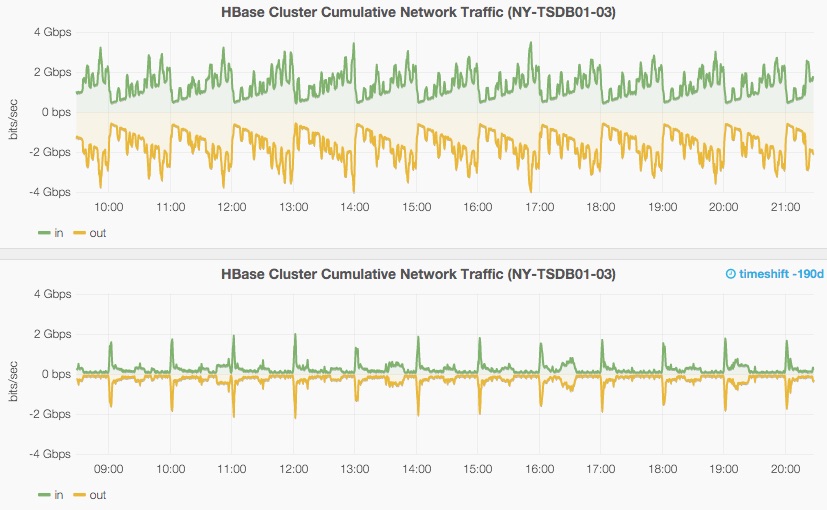 This network traffic was unexpectedly huge considering that our input into OpenTSDB (gzip compressed HTTP JSON) is on average 4 Mbit/sec. Appends can be seen in the hourly seasonality of the above graph. As the row grows over the hour, so do the size of the rows being re-written and and replicated across HDFS and HBase replication.

We found that for stability we have had to greatly increase the timeouts around zookeeper:

With low zookeeper timeouts, if operations took a long time or spent a long time in garbage collection, then HBase servers would eject themselves taking the cluster down.

HBase only has one index. OpenTSDB is optimized around the metric. So for example, querying all the metrics about a host (cpu, mem, etc) is slower than a query against a single metric for all hosts. The HBase schema for OpenTSDB reflects this:

Since the metric and time fields are the start of the key, and the key is the only thing indexed, the more tags you have on a metric, the more rows that have to be scanned to find your particular host. This reduces query speed.

However, host based views are common. In this schema, they have to multiple metrics, and if those metrics have the host=something tagset, the query gets slower as you add more hosts. Combine that with the number of rows that need to be scanned for longer durations and the queries become untenable.

As an Example, os.cpu has only one tag key host, and about 500 possible values in our environment. To query one year of data (downsampled) to a single host in this metric takes about 20 seconds. If you add more tags it only gets worse (i.e. os.net.bytes which has host, interface, and direction.

We work around this query speed issue to generate views in two ways:

To denormalize metrics we put the host name in the metric, and only give it a single tag key / value pair (at least one tag key with a value is required). We use the following argument to tsdbrelay to do this:

This results in a metric like __ny-web01.os.cpu. A year’s worth of data (also downsampled) is queried in ~100 milliseconds as compared to 20 seconds for the normalized metric.

We have struggled some with HBase replication. The secondary cluster has had to be rebuilt when we found corruption, and also when we upgraded to SSDs. With our most recent case of replication breaking we found that force splitting some of the unbalanced regions on the secondary cluster seems to have fixed in (You can see the unbalance in size via the HBase Web GUI).

When replication breaks, the logs grow rapidly, and drain at a much slower rate then they grow:

Since replication backing up uses so much disk space, we have to factor in head room for this when sizing the HBase clusters.

The CI framework we use is called TeamCity. We use it to build packages for Deploy scollector, tsdbrelay, to directly deploy Bosun binaries and configurations into production. TeamCity calls each configuration a “build”.

The are three things in and around Bosun that are Backed up:

The configuration file is stored in Git which is backed up independently (we use Gitlab internally). We now use redis to store bosun’s state and metadata. Bosun will use ledis if no redis server is provided, but we haven’t explored how this would be backed up as it is there for small test setups. In redis we use both RDB and AOF for redis persistence:

Backing up the time series database, in our case OpenTSDB, is one of our pain points. HBase is designed to scale to petabytes. With that much data, a standalone full backup becomes impractical. So HBase isn’t really designed for these sort of backups (See Approaches to Backup and Disaster Recovery in Hbase. This is a shame for us, as we don’t have petabytes of data in another system standalone backups might be an option. Therefore we do the following in place of traditional standalone backups:

Without standalone full backups we are frankly a bit afraid of HBase, but we haven’t had any significant data losses since we started using it.

Our largest pain point is using OpenTSDB and HBase. Since we don’t use HBase anywhere else, the administrative overhead eats up a lot of time. Also, OpenTSDB has had some long standing issues that have been difficult, for example counters don’t downsample correctly and our data is in counter format when possible so we don’t lose resolution. That being said we still feel for us it is currently our best option. We will be expanding our two main clusters with two more nodes each (running tsdbrelay, opentsdb, and region servers) to increase space.

We are very interested in InfluxDB. It is written in Go which we are familiar with and has a rapid devlopment cycle. Bosun has it as a backend, and scollector can send to it since it has a OpenTSDB api style endpoint. However, we are waiting for InfluxBD to have a more stable clustering story before we could consider switching to it in production.